Is the Grand Floridian worth the money?

For me, prior to our stay the Grand Floridian was the creme of the crop, after all it is Disney’s crown jewel. I have foggy memories of visiting a friend who was staying at the GF with her family, and I lounged at the pool with her, thinking that it was a fantastic hotel.

The Grand Floridian is absolutely a beautiful hotel. I believe that I gasped when I stepped into the lobby to check in.

The common areas are breathtaking. There is a band in the balcony overlooking the lobby for Pete’s sake.

So why am I saying all of this with a lead up asking if the Grand Floridan is worth the money?

Take a look at my thoughts below and you can decide for yourself if the Grand Floridian is worth the money.

That’s the thing for me, the common areas are accessible to anyone who wants to come in for afternoon tea or a character meal at 1900 Park Fare. In other words, anyone can sit for a while in the lobby of the Grand Floridian and take in the sites and sounds. It is a lovely tranquil area to do just that while waiting for your dining reservation.

A few of the Dining options at the Grand Floridian

1900 Park Fare is the restaurant on site of the Grand Floridian that offers character dining. Much like some of the other options when it comes to character dining at Disney, it is a buffet meal. Just a note, 1900 Park Fare does not serve lunch, so the options for dining are breakfast or dinner. Also, if you are going to dine hoping to see Mickey Mouse, you won’t find him at 1900 Park Fare. Instead you can expect to hang out with the Mad Hatter, Mary Poppins and more.

The Rooms at Grand Floridian

Our Room at the Grand Floridian

For my family of 4 the room was tight at best and since I was attending a conference I wasn’t in the room very much. We made do with our kids at ages 5 and 7, families with kids that are older would feel even more cramped. Just a general note,

Why we loved the Grand Floridian

Here is the biggest draw for my family in terms of a reason why I would stay in the future and it has nothing to do with the room.

The Pools at the Grand Floridian

If a good pool, is high on your priority list when it comes to choosing which Disney Resort to say in, then the Grand Floridian should top your list.

If I could do my first Disney experience with kids differently, I wouldn’t have spent marathon days at the parks. Rather, I would have taken advantage of the monorail service to our hotel and had some downtime at the pools.

After all the pools at the Grand Floridian are the best over all Disney properties. I mean look at these. 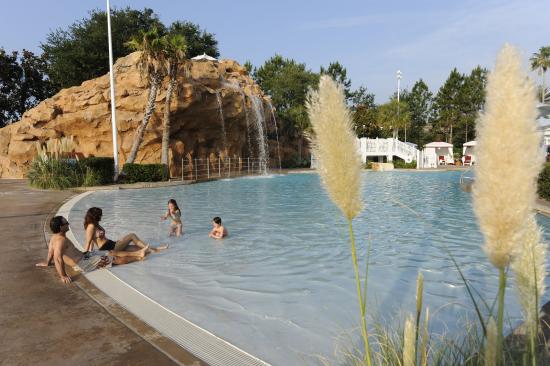 Does The Grand Floridian have a gym/fitness center?

The short answer is yes. In fact, the Grand Floridian is one of the few Disney properties to have an onsite gym (and spa). Look let’s be real here for a minute, you aren’t going to be blown away by the set up but, if you are looking for a quick run on the treadmill or the elliptical then it will get the job done.

When was the Grand Floridian built?

When does the Grand Floridian decorate for Christmas?

Can you walk from the Grand Floridian to the Polynesian?

You must be after a meal at Kona (the restaurant at the Polynesian! The answer is yes, you can! There is a pedestrian path that connects the two resorts. The walk takes about 10 – 15 minutes.

Do you love the Grand Floridian? Tell me in the comments!

I've never been to WDW, but I can apply many your points to our stays at the Grand Californian at Disneyland! There's a point at which the hotel splurge overshadows the real destination: the Disney Parks!

You are spot on Carissa! I totally agree!

Family Vacations U.S. is a family travel and lifestyle website focused on finding the best spots for memorable family vacations.

With every trip you and your family takes, there are bound to be hiccups along the way. Our goal is to give you our best tips in hopes that your family getaway goes as smoothly as possible.

From navigating Disney, to getting off the grid at a dude ranch and our favorite beach spots, we've covered it.

120 Free Things to do in Kentucky

Must See Attractions in Connecticut